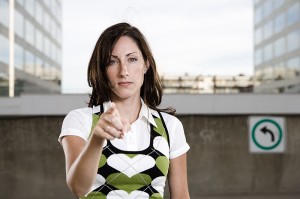 Have you ever found yourself blaming others for your lack of results? I used to blame my sales manager because I never got the good leads. I used to blame the economy, the President of the United States. I even blamed my family and negative relatives for my lack of results. There was one problem with my list. I wasn't on it. When I started taking responsibility for my decisions, then everything started to change for me. That was over twenty years ago and it has been an incredible journey ever since.

Let me share a couple of stories to illustrate my point. My son Joshua had a friend over recently for dinner. I will call him Joe. In a previous conversation with Joe, he mentioned how excited he was about his new job and he really loved it. At dinner I asked Joe how is new job was going. He said he got fired this week. To my surprise I asked him what happened? Joe's response was, “I got fired because of my brother.” I said, “How is that possible?” Joe responded with, “I was always getting to work late because of him. He just wouldn't get out of bed in time to drop me off.” I simply said, “I'm sorry to hear that.” By the way Joe has had several jobs over the past couple of years. He no longer has a car and is now living at home.

I thought to myself, how interesting and didn't say another word and went back to finishing my dinner. At that moment I had an instant flashback to where I was 35 years ago blaming everyone else for my troubles in life.

Several years ago I hired a new sales person (recently graduated from college) to sell our training and coaching services. He started out of the gate fast and within 45 days, I saw little or no activity. He came into my office early one morning and asked if I had time to talk. I invited him in and offered him a chair. He had a yellow pad with a list of a dozens items on it. He proceeded to say, “I've been here for approximately 45 days and have observed many things that are wrong with your company and I wanted to share a few with you.” I said, “I'm all ears. Let err rip.” He proceeded to tell me all the reasons why he wasn't producing better results. He blamed our website, our CRM, lack of slick marketing materials, lack of advertising, etc. I listened intently. Could we make improvements in the items that he mentioned. Of course. It's all about progress not perfection. These items didn't prevent our other sales people from generating significant commissions.

When he finished, I said, “I really appreciate you bringing these items to my attention. There is one problem with your list. You ain't on it.” He looked at me stunned. He said, “I don't understand?” I said, “The problem is you. Not your list. You are making excuses for not making sales calls. It's that simple.” I ushered him back to his office and found a box and had him pack up all his items. When he finished I led him out to his car and said, “It doesn't sound like this is the right place for you and you might be happier some place else. I wish you the best.” He couldn't believe what just happened.

November 1, 1989 I filed bankruptcy. I lost everything with the exception of the skills and abilities I developed over the previous nine years. As I was sitting in federal court waiting for my turn with my wife Jane and my two very young children, Sarah and Joshua, I began to blame the stock market, the economy, miss guided leaders, companies that I invested in, poor advice from others, the crash of 1987 and so on. As I returned home that day feeling like I had been in a train wreck, it occurred to me, there was indeed one thing wrong with my list. I wasn't on it. I was to blame and no one else. I ended up where I did because of the poor decisions I had made. It was no ones fault but my own. I needed to take responsibility for my actions. I was the problem.