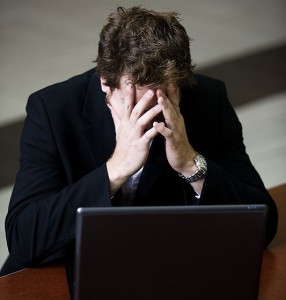 Have you had enough of sales? Are you at the end of your rope and ready to quit? There have been few times since 1980 I have wanted to walk away from sales and do something else because I was so frustrated. Only one small problem: What else would I do? You see, I love sales. I love helping people solve their problems. If you had the cure for cancer, how many cancer patients would you contact each day? As many as you could. In the past when I have become discouraged, I get back to the basics of selling which is seeing the people and solving their problems. I take the focus off of myself and put it on the prospect or customer. After all, it's not about us, it's about the people we serve.

Selling, after all, narrows down to one thing and one thing only…tell your sales story to as many of the right people every day. Depending on your target audience, could you tell your sales story to five new people each day? What about if it was only five new prospects each week? Five multiplied by fifty-two weeks is 260 new prospects. How many of those sales do you think you could close?

Sales is really simple. It's a contact sport – being in the presence of the prospect or client either by phone or face to face. Sometimes when we get away from the basics and fundamentals we find ourselves full of fear, worry and anxiety. I heard a wise man once say, “Work, don't worry.” Sales is the easiest job in the world if you work at it or the hardest job in the world if you take the easy path and don't.

I remember what Tom Vanyo said to me at a sales meeting in May of 1984, “If you don't make a major change today, you will be doing exactly the same thing next month or next year.” I had been putting of keeping track of the number of calls I made each day and how many new prospects I talked to. I personally thought that keeping track of my numbers was a waste of time and paper. After all, I was already one of his top producers, so what did it matter? Well, after what he said to me at that sales meeting, it mattered. I went back into my office and began to keep track of everything.

At first it was depressing. The numbers were so revealing. I thought I was so productive. I couldn't believe how much time I was wasting each day. The numbers told me how few new prospects I was actually talking to each week. After all, prospecting is the foundation of all successful sales people. After disciplining myself to keep track of each dial, contact, prospect, and sale I was able to determine how many dials it took to reach a qualified prospect which turned into a sale. What if I told you that someday each time you dialed the phone it could be worth $250 and they don't even have to answer the phone? What about each prospect that agrees to an appointment was worth $5000 and they don't even have to show up? How excited could you be about your sales career?

I know that sales is more than a numbers game. But how will you ever know what's working and what's not unless you keep track? You see, it's to easy to get faked out by being busy as I learned by keeping track of my numbers. By keeping track of my numbers each day it revealed how productive I was and how much time I was wasting with prospects who would never say yes. Don't you love all the prospects that keep asking you to call them back month after month and nothing ever happens?

There are two major reasons for keeping track of your numbers each day: Number one, you want to know what working and what's not. Most sales people avoid keeping track of their numbers because it reveals too much they don't want to know. If you don't keep track it's to easy to go home at the end of the day and conclude that you have had a busy day. The second major reason for keeping track is the discipline of doing it. The discipline of keeping track each day will affect all other disciplines. In my search for the secrets to success in sales I have found there are no secrets. Sales is a highly disciplined activity repeated every day. Over the years we have all heard the saying, “An apple a day keeps the doctor away.” You have heard that before, right? I remember what Jim Rohn said many years ago, “What if that were true?” Would it be easy to eat an apple a day? Of course it would. It would also be easy not to.

The whole foundation of being successful in sales is seeing the people!