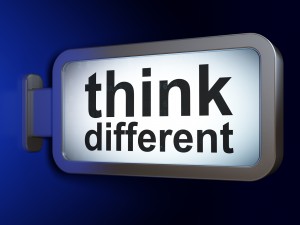 How competitive is your business? Did you know that it is cheaper to innovate than it is to compete? In 1997 Apple was on the verge of bankruptcy. That year Steve Jobs came back to Apple the company he co-founded and they began to innovate. Apple’s first advertising campaign was “Think Different”.

How are you thinking different than your competition?